The Luisa Hairabedian Foundation (LHF) is a democratic and horizontal NGO with interactive and interdisciplinary programs.

The LHF works to promote Human Rights through five programs study the subject in greater depth with a global vision.

The FLH has a stable work team that carries out the various tasks of the organization. 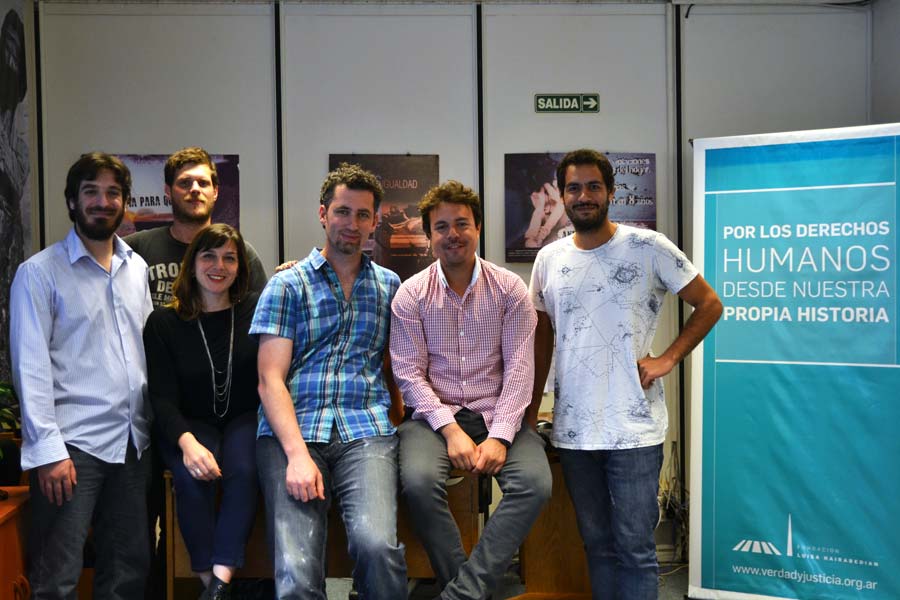 The Foundation is a Latin American human rights organization which draws from the experiences of the Armenian Genocide through memory, truth and justice to raise public awareness about serious violations of human rights and the importance of education in preventing further genocides. The LHF seeks to bring about positive social change for a more equitable society by teaching history, the social sciences, and international law.

The LHF shares and conducts its activities in alliance with similar organizations operating in Latin America and other places worldwide to help achieve similar social change and raise awareness through education. By engaging with other organizations, we encourage dialog and erase the concept of “them” against “us” to promote a more just world.

In 2005, the Luisa Hairabedian Foundation was established to sponsor and support the Trial for the Right to Truth of the Armenian Genocide initiated by Gregorio Hairabedian and legally sponsored by Dr. Luisa Hairabedian in 2000.
Luisa passed away in 2004 after coming back from her travels in Europe to obtain international support for international archives from various European countries that would be presented as evidence in the trial. Throughout her life, Luisa Hairabedian expressed her commitment to the defense and promotion of human rights through her solidarity with various forms of resistance against the military dictatorship that devastated the country from 1976 to 1983.
After her passing, the foundation was created in her name to honor her fight for human rights and to continue her legacy of preserving the values of truth, memory and justice.
In 2011, the court declared its final verdict for the trial of the Right to Truth of the Armenian Genocide, declaring that “in the Armenians case, a genocide had occurred”. In this way, the Argentine state became the first and only country in the world in which all three branches of government (executive, legislative and judicial) recognize this genocide. 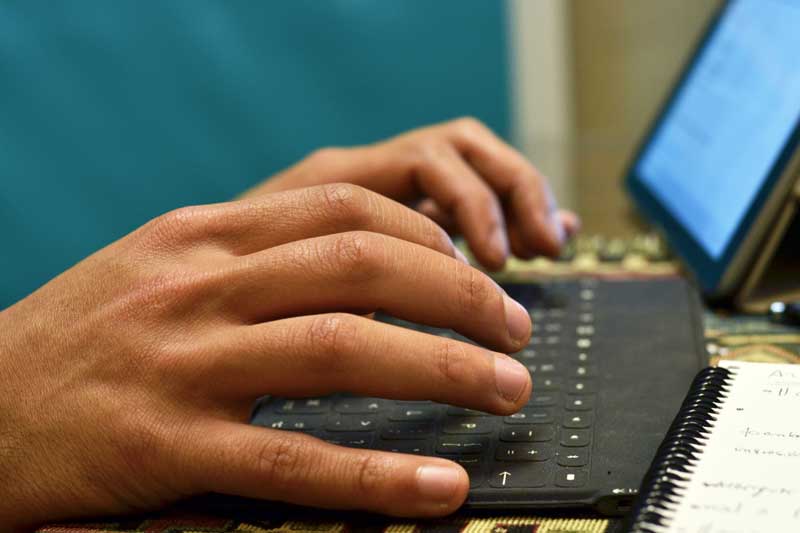 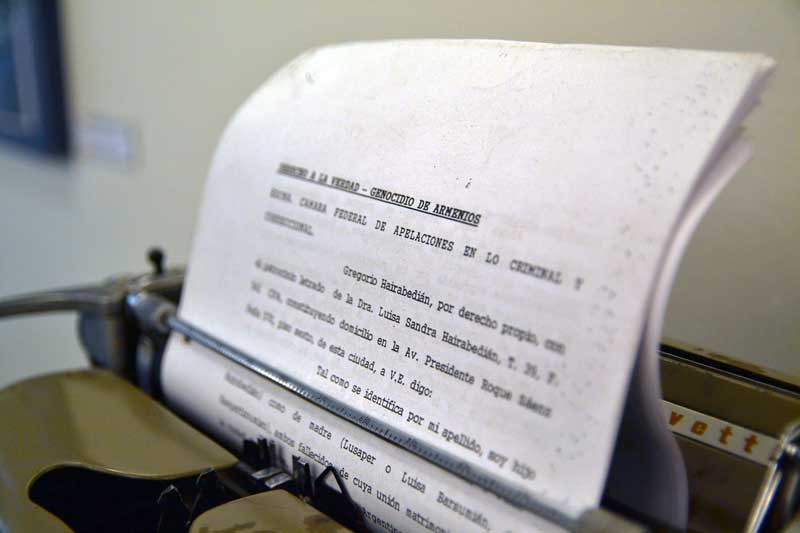 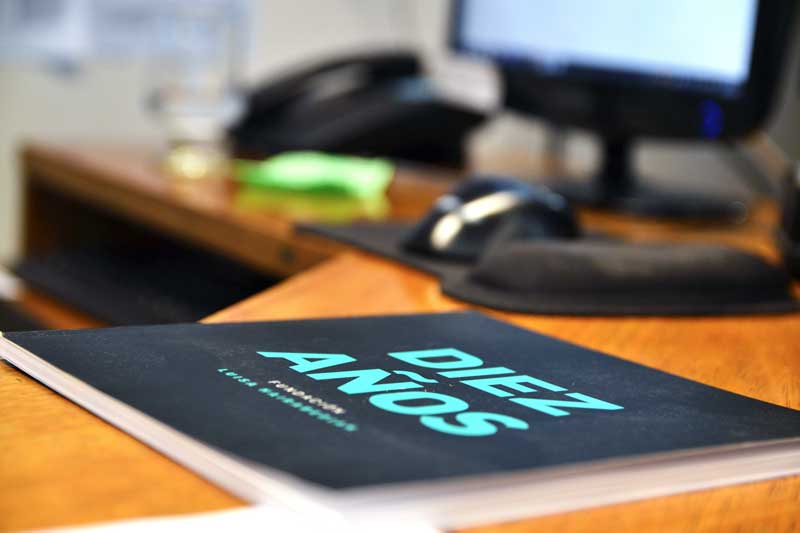 The historic judicial proceeding initiated by Gregorio Hairabedian together with his daughter Luisa Hairabedian explained briefly.

The initial demand for the Armenian Genocide Truth Trials

On December 29th, 2000 lawyer Gregorio Hairabedian, with the support of his counsel and daughter Dr. Luisa S. Hairabedian, began a case pursuing the right to the truth of the Armenian Genocide relative to the search of the truth and the fight against the impunity of the genocide against the Armenians by the state of Turkey from 1915 to 1923 of which specifically were constituents of the victim’s paternal and maternal families during that time in the Palu and Zeitoun vilayets respectively.

The proceedings before the Buenos Aires Federal Judiciary (Judge)

After appealing a decision against the first instance, the National Clearinghouse for Criminal and Correctional office ordered the Court of First Instance to conduct an investigation as part of what has been called «The Trials in Search of the Truth» or «The Truth Trials».

The judicial order for the continuance of the search for evidence.

After the numerous diligent processes, on October 23rd 2002, the Federal Court no. 5, Ministry no. 10 headed by Dr. Oyabide issued a resolution that most pertinently said: «On the 23rd of October 2002 Buenos Aires… Resolves:… 2) To solicit the Turkish Government through the Ministry of Foreign Affairs, International Trade, and the Cult of the Nation and that through the preceding methods: a) a detailed report on the fate of the paternal and maternal families of Gregorio Hairabedian, mentioned in fs. 22/23, in Palu (Jarput) and Zeitun (Soulemainy), during the proceedings that took place between 1915 and 1923; b) Make available the archives that are relevant to the subject matter and to the relatives of the claimant through disappearance, deportation and execution. 3) To solicit the governments of Great Britain, The United States of America, Germany and Vatican City to give all of their archives relevant to the events that occurred in Turkey between 1915 and 1923, in the vilayets of Trebizond, Erzerúm, Bitlis, Diarbekir, Jarput and Sivas, and relevant to the family of the claimant. 4) To solicit the United Nations Department of Information to come forward with the following document: ECN.4 sub. 2 1985 6 named «The Updated and Revised Report on the Question of Prevention and Punishment of the Crime of Genocide» prepared by Ben Whitaker and approved in the 38th session, Item 4 of the provisional agenda of the United Nations of August 1985 and an authentic copy of the minutes of the 38th session, Item 4 of the provisional agenda of the United Nations… Recorded and notified. Signed: Dr. Norberto M. Oyarbide, Federal Judge.»

The international exhortations that solicit the remission of evidence

Subsequently, the Tribunal ordered the Argentine Chancellery to continue to pursue the corresponding International Exhorts the were promptly based in the aforementioned countries.
German and the Holy See consequently responded by informing that the historical and political archives were available to the solicitors. In August 2004, Dr. Luisa Hairabedian visited Europe and successfully gained access to the Political Archives of the German Minister of Foreign Affairs. During the trip Hairabedian met with distinct experts of international prestige in the field of International Human Rights, and with a number of representatives in the Armenian community in France and Germany in efforts to strengthen international support for the cause.

The role of the Armenian community in relation to the Truth Trials.

The sudden death of Luisa Hairabedian and the creation of the Luisa Hairbedian Foundation to continue with the Truth Trials.

The continuation of the international search for evidence for the Truth Trials.

After the passing of Luisa, in efforts to continue her legacy, the distinct members of the foundation, especially her son Federico Gaitan Hairabedian, a law student at the time, proposed to continue gathering evidence as his mother started in 2004. Gregorio Hairabedian, President of the Luisa Hairabedian Foundation, made possible trips to distinct countries throughout Europe, Asia and to the United States with the objective of obtaining government documents that for certain reasons the states had not made available as the court decision made in 10.23.02 demanded for and was mandated by the aforementioned Dr. Oyarbide.

Through certain trips during the years of 2005-2010, they successfully obtained valuable classified government documents from the United States, France, Germany, England, Holy See, Belgium, Armenia and Jerusalem that were then translated to Spanish. The documents contained elements of evidentiary validity sufficient enough to be presented in the Truth Trials and were legalized. These documents included diplomatic letters, classified reports, witness testimonies, orders, among others, resulting in a unique archive that clearly documents the crimes committed by the Turkish State against the Armenian population from 1915 to 1923.

A Special mention for the documents provided by the German state with the assistance of Prof. Dadrian

Distinct specialist and collaborators like the prestigious historian Pascual Ohanian and lawyer Mariela Bondar traveled to the United States, Armenian and the Vatican City in search for evidence. A commision of historiographers formed part of the Luisa Hairabedian Foundation and led a detailed investigation of the incriminating evidence of the German State.